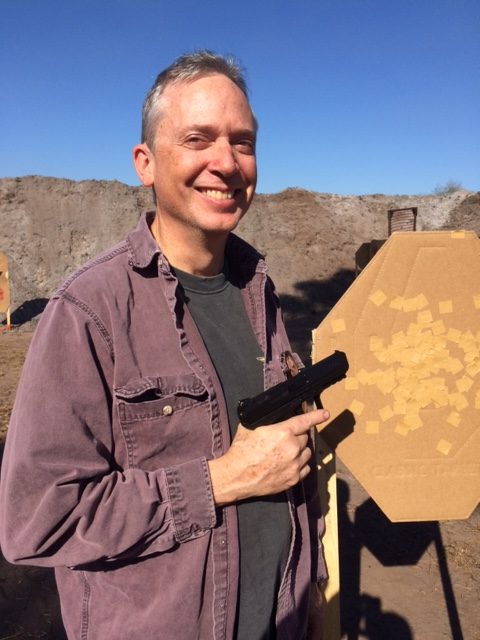 Sid Park is grinning ear to ear with his new Canik TP9, courtesy of Century Arms

Saturday was a wild day of competitive shooting  as Okeechobee Shooting Sports rolled out our annual Guns Gone Wild!!! Mega Match. The Mega Match is based on our regular Guns Gone Wild!!! matches but is expanded to seven stages and well over one hundred targets. Some of the most popular stages included “Marshall Gary” and his cow town stage, Chuck’s big steel “Ferrous Maximus” stage and Luke’s dizzying Double Whirlygig stage.  With seven stages operating at one time and plenty of staff on hand, shooters moved quickly between stages with little waiting time. However, before all the shooting started, over thirty prizes were awarded by random drawing, including two guns. Century Arms, one of the sponsors of GGW presented Sid Park with a new Canik TP9 in the random drawing, and Wayne Waits took home a new Stevens 12ga pump shotgun. In addition to the guns, a large selection of Radians gear was awarded to participants. Radians, another sponsor of GGW, provided shooting glasses and other shooting accessories for the random drawing. With so many prizes to give away, two Range Officers were needed to call out the numbers in quick fashion.

After all the shooting fun was done, calculations were made to determine the match outcome. Taking 1st Place with a time of 120.48 was Will Hill, followed by Mark Suchy who took 2nd Place with a 135.90 and 3rd Place was captured by Rob Robinson with a 137.64. All the scores can be viewed on Practiscore.com. When searching for the match, simply enter OKSS in the Search field to find the Okeechobee Shooting Sports matches.